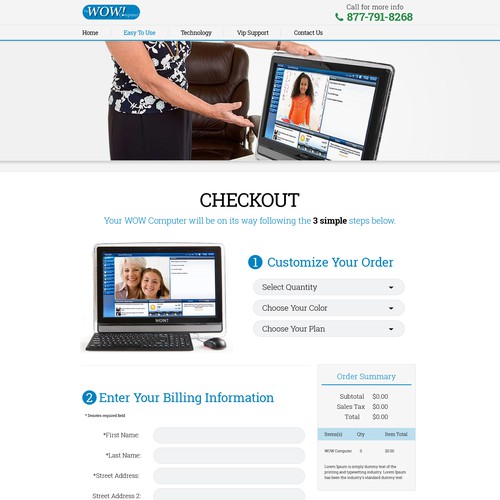 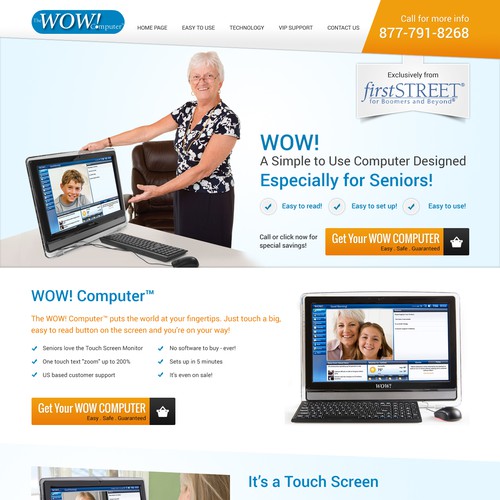 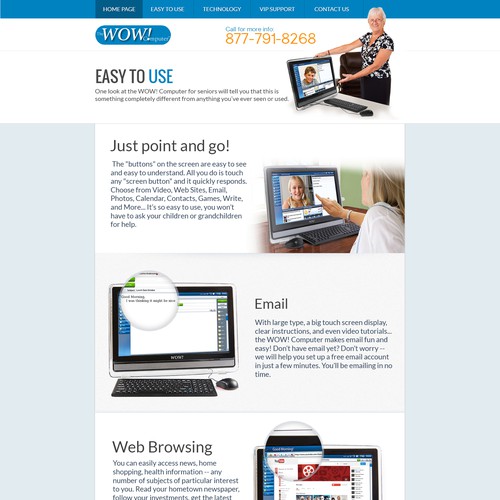 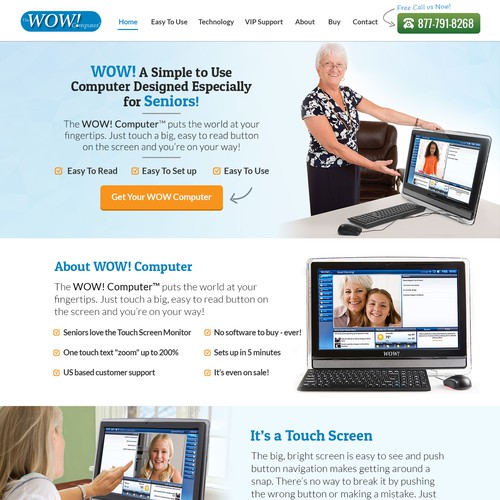 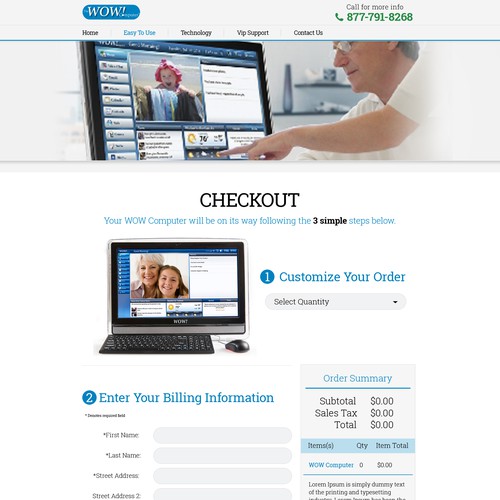 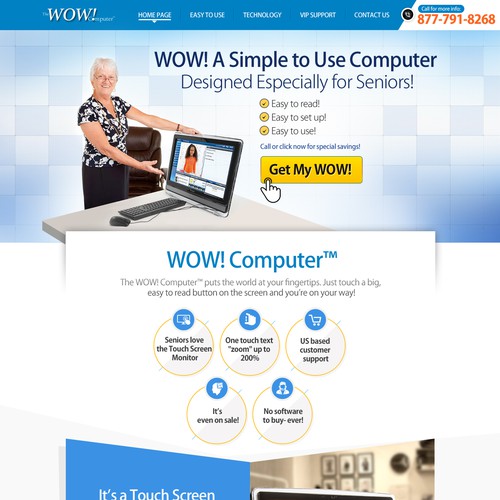 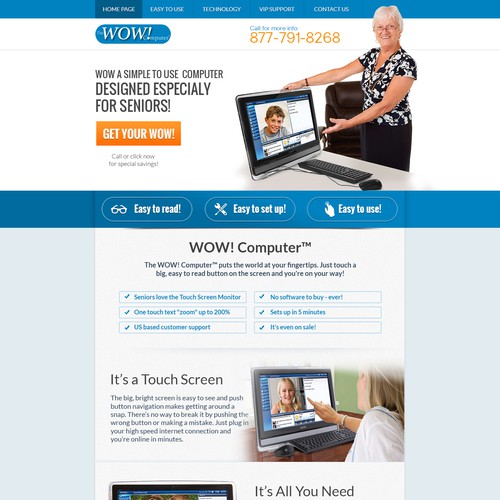 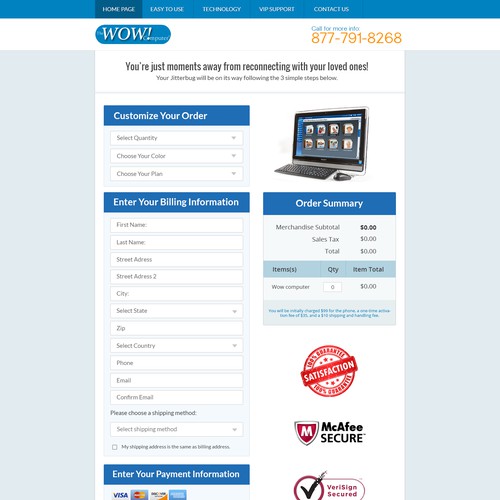 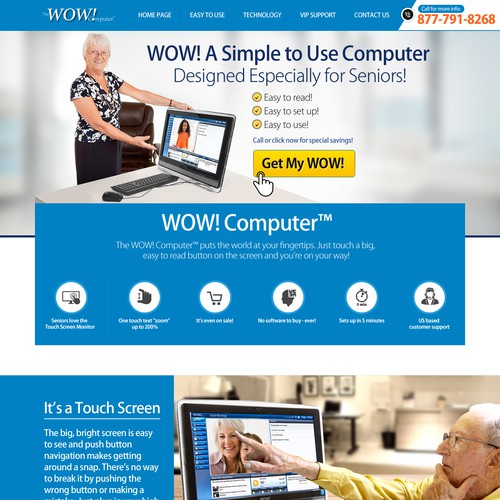 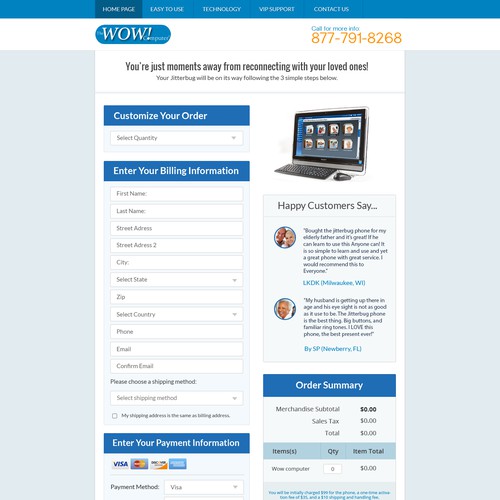 WOW Computer brought to you by firstSTREET

The main objective of the mywowcomputer.com redesign is to optimize the site for conversion and usability, including adding the onsite checkout process as we have with our other recent mini site redesigns. There are two distinct audiences that are interested in the WOW computer, current/previous computer owners that want an easier experience and those who have never owned a computer. We need to be sure to speak to both of these audiences without excluding the other.

ABOUT THE WOW COMPUTER

The WOW Computer is THE computer for the 65+ senior citizen audience. It is built entirely with an older audience in mind. The main value proposition is easily connecting the customer with the world around them. This point is incredibly important to both of our customer groups: those who own(ed) a computer and those who have not. These are people that realize that technology is playing a larger and larger role in our society but often believe that they have been “left behind”. Their kids and grandkids send emails, connect to social networks, take digital photos, and much more with ease. Our visitors want desperately to be involved but are afraid that they don’t know how.

Now, imagine connecting the same audience (who are mostly homebound now due to age, mobility, health, etc.) to the wonders of the world without the burden of learning some sort of cryptic technology. Instead, with a few presses of the touchscreen, the customer could be video chatting with their grandchildren, thumbing through virtual piles of family photos, researching their family tree, looking up recipes, and much more. The entire world is on the internet and they should be too!

Try to think like our customer for a moment… You live in a world where everything is online – Your friends, your kids, your bank, even television shows and you are missing out on all of that because you’re afraid you just won’t understand how to use a computer. While this sounds crazy to somebody who grew up using computers, it’s very common for seniors. Then, one day you see an advertisement for a computer made for people just like you. It’s easy to use, easy to see, and it gets you access to that outside world that is online – so you decide to check it out. Many of our customers will come to our website using a family member’s computer or even their own that they are frustrated with. The number one goal of this site it to take the customer from their skeptical thinking, and convince them that this is something they can actually use and understand.

We’ve found that one of the largest barriers for seniors enjoying computers is the amount of knowledge that they believe is necessary to use a computer. For those who own or have owned a computer before, most of them have become frustrated with how difficult it is to use their computer, especially since Windows 8. Conversely, those who have never owned a computer often have not due to the fear that they wouldn’t know how to operate it once they purchased it. WOW’s touchscreen and intuitive menu structure make it incredibly easy for anyone to do what they’d like to do. An important aspect of selling the WOW that will be necessary to convey is the menu structure and how easy and intuitive it is to navigate to and perform the tasks that the user wants.

Another piece of the value proposition is the WOW’s security. Since the WOW operating system is Linux-based rather than Windows, it leaves the WOW Computer less susceptible to hackers and viruses. For users that own(ed) a Windows PC previously, they’ve probably either heard the virus horror stories or experienced them directly. On a similar note, users who have never owned a computer have probably still heard stories of viruses but also just have a general concern about whether or not their experiences on a computer are safe. With WOW, they are!

Finally, our customers are also interested in how WOW support works. WOW support is entirely based right here in the USA with fluent English speakers. This particular point is much more important to our older audience. WOW support also offers remote access support where, with the customer’s permission, a technician can log directly into the customer’s WOW and the customer can watch as the technician shows them how to use a particular function or sets up a specific feature for them. Each unit also ships with a well-organized manual with supplemental help articles and videos built into the WOW user interface.

The primary driving force behind this site redesign is to increase conversions. We'd like a clean, attractive site that specifically caters to our older, 65+ year old audience. The site should be clean and professional but convey trust and comfort.

The homepage text content will be fairly similar to the current
mywowcomputer.com landing page. It will contain approximately
300-500 words. There should be a main headline and at least 2
sub-headlines. There should be strong calls-to-action in the
header/hero area of the page as well as at the bottom after the text.
Horizontal rules or large blocks of contrasted color should be avoided
because they have a tendency to reduce conversions.

We will have multiple subpages utilizing this design template. This
page will be similar to the homepage but have more text (400-700
words). The header/hero area may be smaller than the homepage. While
this page will primarily be for SEO purposes, this page should still
be visually appealing and have images scattered appropriately.

The final page is a checkout page. An example of one of our current
checkout pages is here... https://www.jitterbugdirect.com/orderform/.
This new checkout page should be easy to complete, match the "feel" of
the other pages, and promote the final conversion.

It is imperative that designers keep out 65+ audience in mind. We've
found that our older audience does not like dark colored backgrounds
and light colored text. Also, avoid smaller fonts. DO NOT use images of computers other than the WOW computer. We do not need social media icons anywhere on the design because we do not use social media for this product. We do not need an email form for this product.

Help Build the Ultimate Business Wordpress Theme
US$ 899
Semi-custom Wordpress websites for small businesses that want a stunning, top-of-the-line, clean, and elegant website th
28
entries
15
designers
Logo for rapidly growing software consultancy
$ 299
Boutique software development consultancy focusing on startups and companies looking to restart their technical environm
61
entries
19
Designer
Logo for new app!
CA$ 399
We’re a video chat platform for people to get health and wellness advice from experts.
112
entries
28
Designer
A logo for a company that develops software for culture
DKK 1,999
I make back-office administration software for major cultural events and institutions. My clients include major Swiss fi
36
entries
6
diseñadores
The easy way to build user notifications needs a logo
399 $US
Every business application needs a notification center to notify its users of important activity in the system. For exam
129
entries
40
designer graphistes
Create a logo for a brand new High Performance Compute facility!
239 £
NI-HPC stands for "Northern Ireland – High Performance Computing" The facility is being launched to enable/advance re
38
entries
14
designers