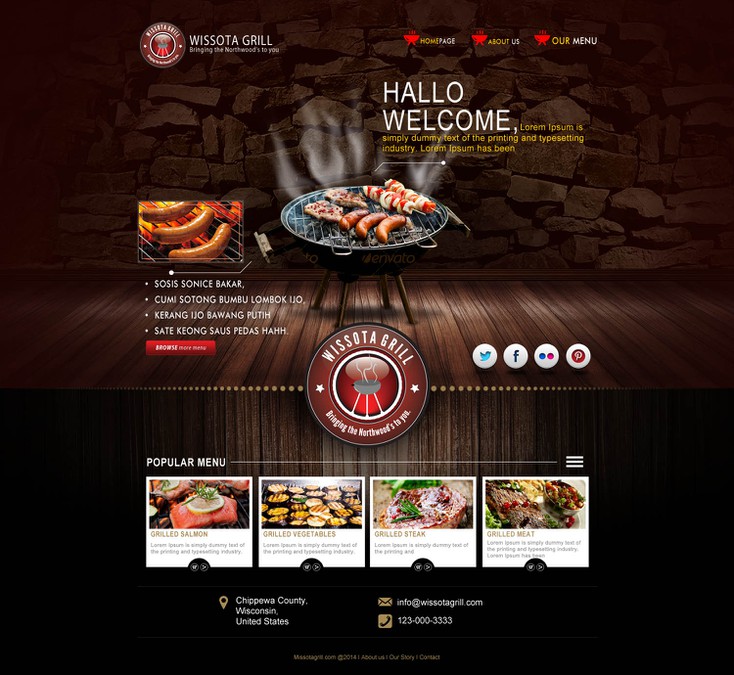 The next hot restaurant concept.

No but have the domain. http://www.wissotagrill.com

Lake Wissota is a reservoir in Chippewa County, Wisconsin, United States, just east of the city of Chippewa Falls. It covers an area of 6,024 acres (2,438 ha) and has a maximum depth of 72 feet.
The lake is a popular recreation destination in northwestern Wisconsin, in the summer for boating, canoeing, fishing, water skiing, and swimming, and in the winter for ice fishing. On the northeastern shore lies Lake Wissota State Park, popular with campers, hikers, swimmers, and anglers.
The lake was formed by the construction of the Wissota Hydroelectric Dam on the Chippewa River, completed in 1917. The dam was built by the Wisconsin-Minnesota Light and Power Company. An engineer on the project, Louis G. Arnold, named the lake by combining the beginning of "Wisconsin" and the ending of "Minnesota".
In the 1997 film Titanic, Leonardo DiCaprio's character Jack Dawson mentions that he went ice fishing on the frozen waters of Lake Wissota as a boy. This would have been impossible, as the RMS Titanic sank in 1912, three years before construction on the dam that formed Lake Wissota began.

Comienza ahora
Hospitality group
$899
We are a hospitality group of restaurants and we buy franchise to bring it to the emirates market. We are looking to...
107
entries
36
designers
Cool new Pizzoteca in NYC needs a website - La Grata
US$2.049
we are opening La Grata a pizzoteca in the South Bronx of New York City. it will offer great authentic cuisine and at...
238
entries
71
diseñadores
Create an elegant and eye-catching design for Vaticano Cucina
CA$2,814
This is an italian restaurant that makes authentic napoletana and montanara pizzeria with high-end street food and am...
88
entries
24
designers
Create a website for Central Texas' top rated locally sourced restaurant.
1.899 US$
We are a full service organic, local restaurant serving diners living or traveling through the Central Texas area.
127
entries
29
designers
Help us destroy McDonald's by designing a perfect website!
€529
We are a vegetarian burger bar. Although our burgers taste like meat-burger, we do not use meat. Björn Burgers is tryin
76
entries
20
designers
Design A Fresh New Website for Infinito's Pizza!
1 049 $US
Infinito's is an independent, local, family-owned, and operated chain providing an All You Care To Eat pizza, pasta, sal
34
entries
10
designer graphistes
Más información sobre diseño de página web
Vea como funciona