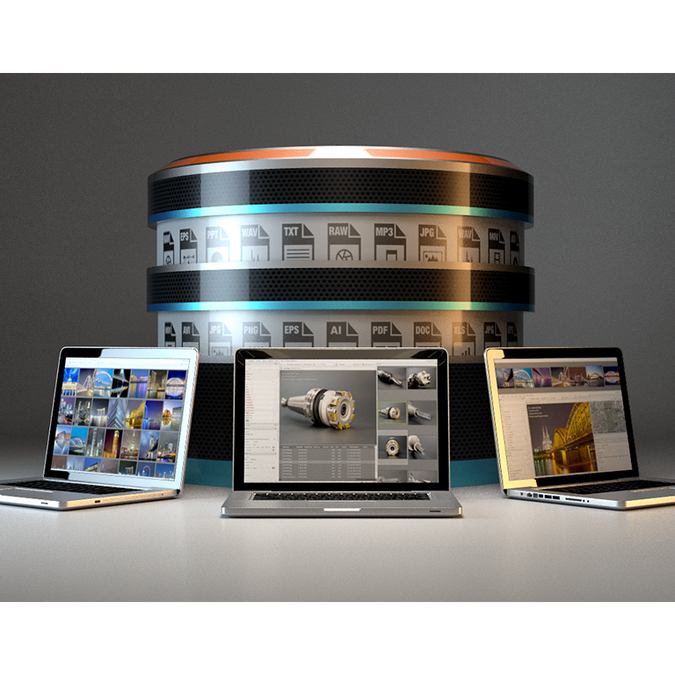 We need a 3D illustration about DAM Software, network and notebook 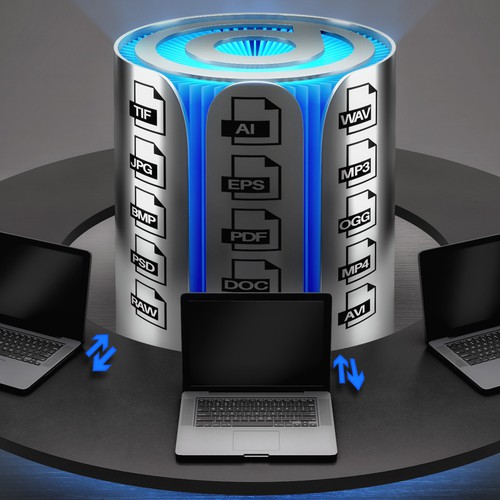 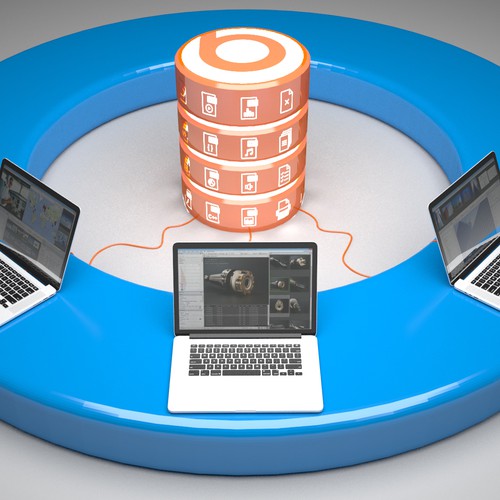 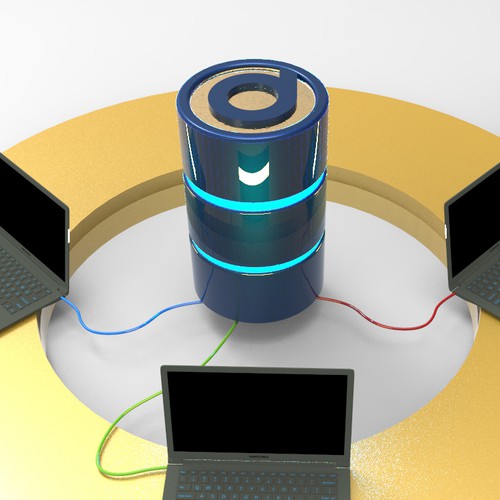 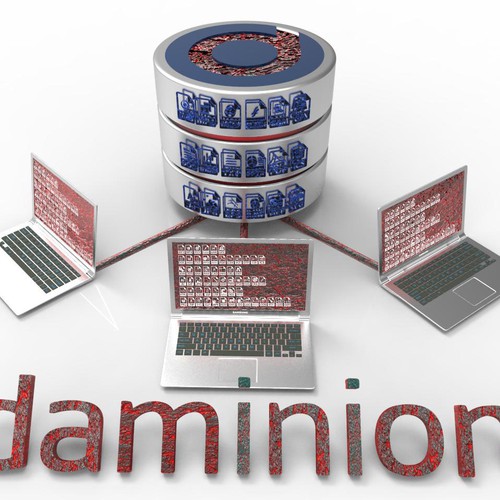 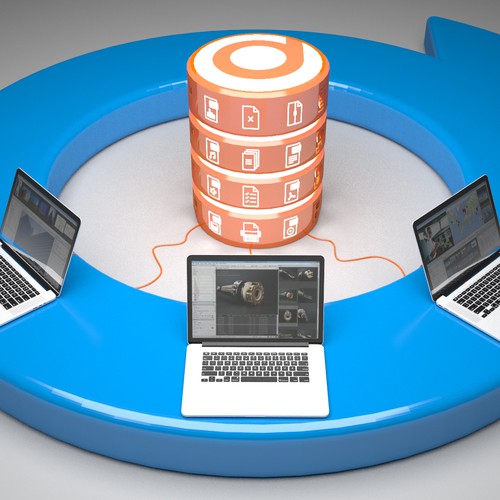 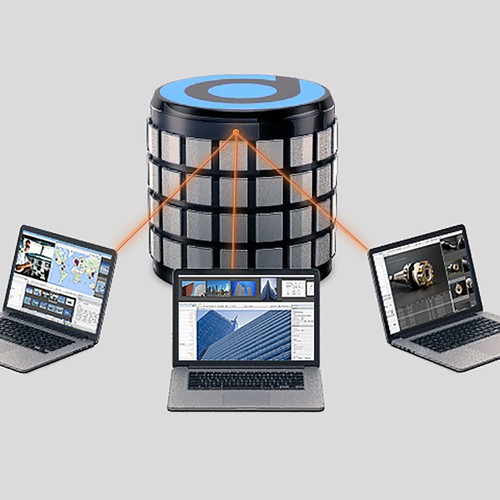 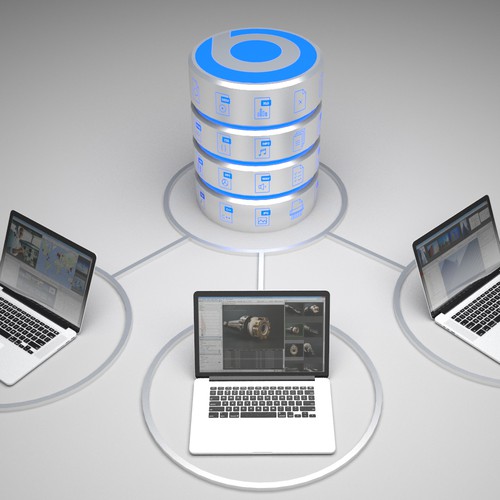 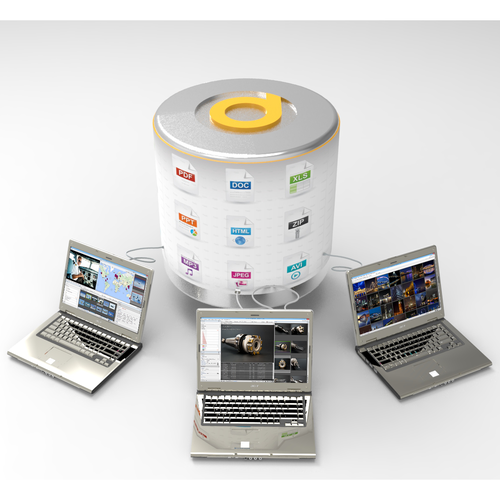 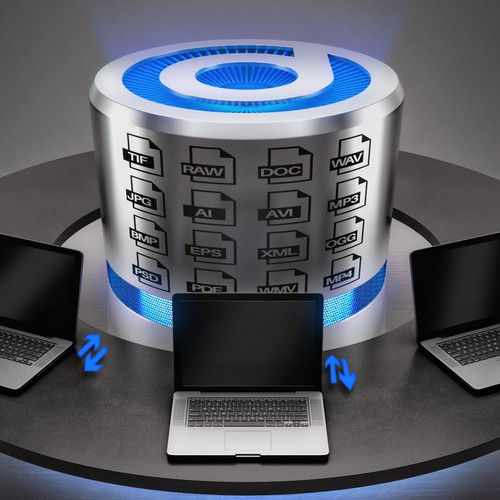 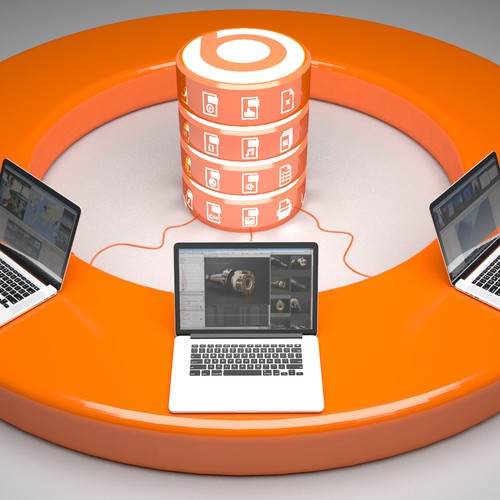 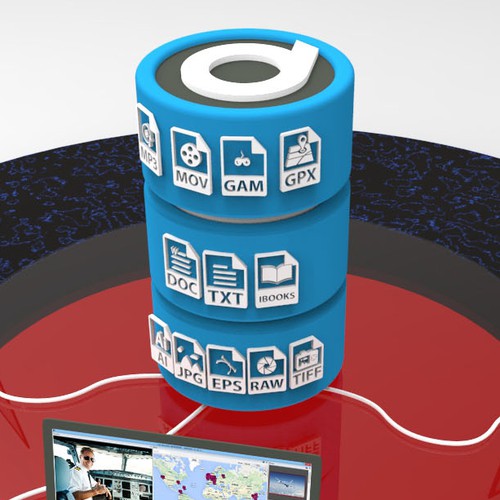 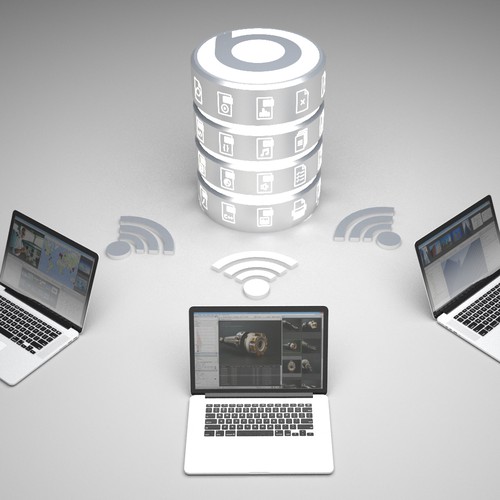 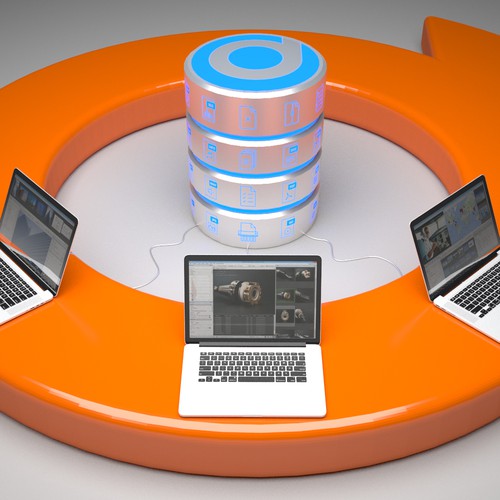 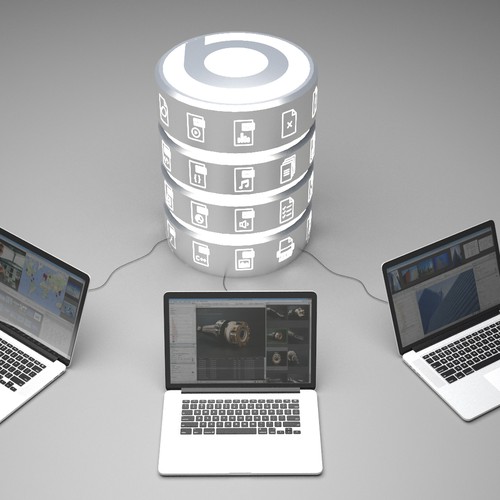 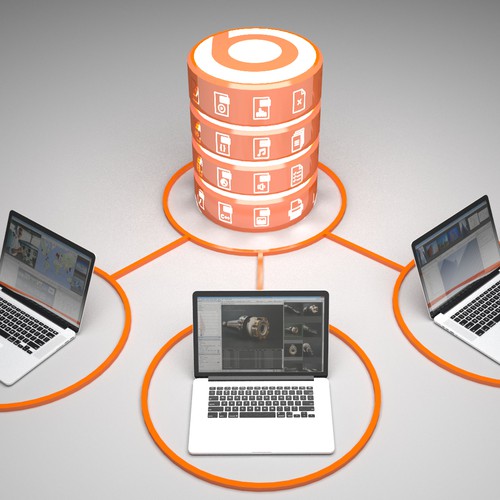 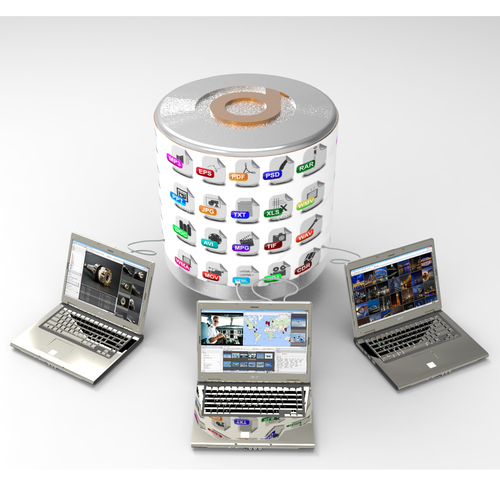 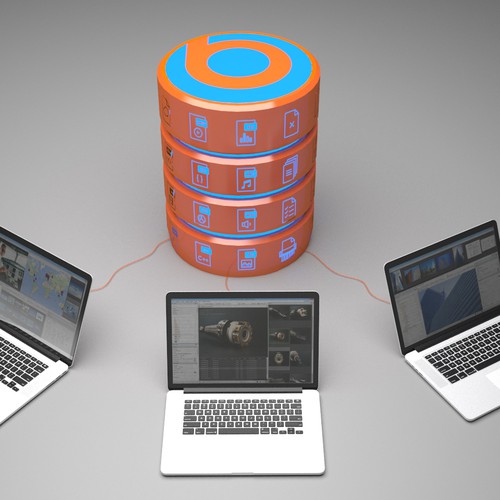 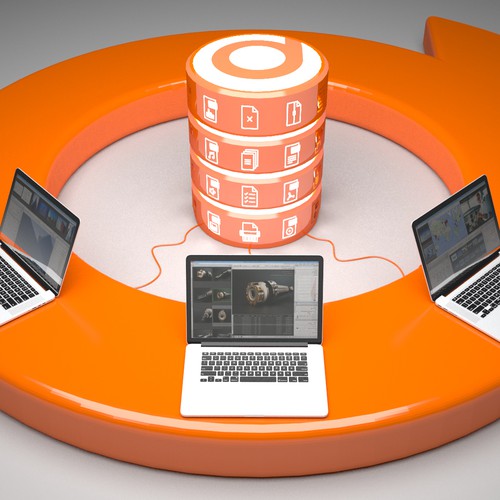 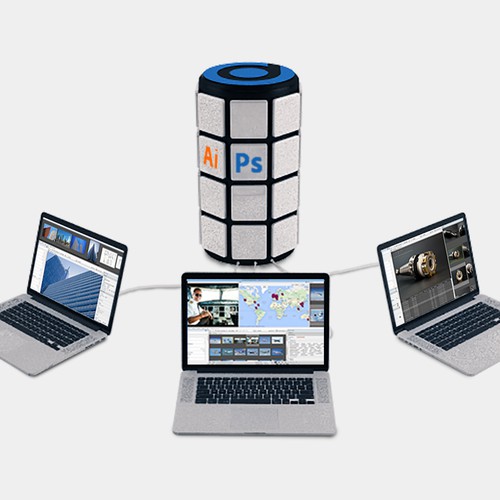 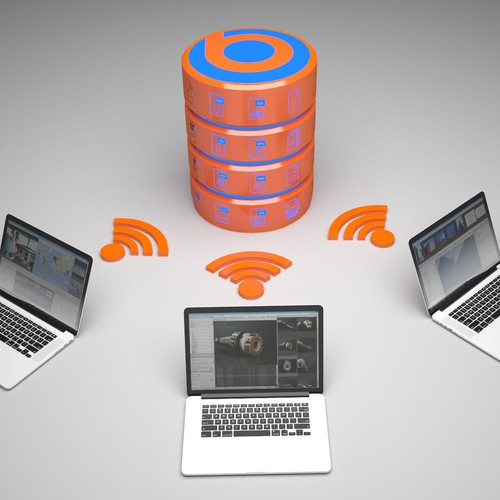 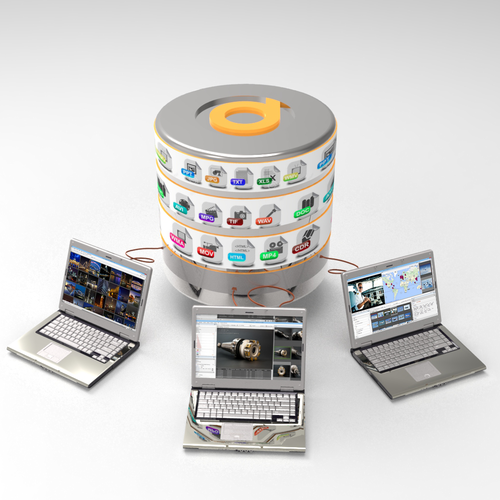 We produce and distribute a digital asset management solution for companies and Graphic and Web Designers. The software can be used across local networks by Teams to manage, search and share a wide variety of file formats of image, audio, video and document files.

We are looking for a kind of symbolic image that concisely describes the concept and the functionality of digital asset management in the network.

We imagined roughly that in the center should be placed a sort of database container (possibly a round cylinder with our company logo as a cover) surrounded by three notebooks that are symbolically connected via network technology with the database. On the surface of the Cylinder there should be placed all sorts of file type symbols like TIF, Jpeg, BMP, Kamera-RAW, AI, InDesign, PDF, EPS, XML, TXT, DOC, CDR, WAV, MP3, OGG, WMV, MP4, AVI, and so on…
The Notebook Screens should be inclined towards the viewer because Screenshots of the program will be placed there later on.

The design should be as clear, straightforward, classy, businesslike and not playful act. It should also act as realistically as possible with lights and shadows, preferably 3D rendering.
As primary colors blue / cyan, gray and accents of orange should be used.

Design A Cybersecurity Challenge Coin For Secjuice.com
449 €
We are a non-profit cybersecurity writers club of 150+ writers and we want our own writers challenge coin designed.
62
entries
23
designer graphistes
Logo for Getphishing.com
$ 299
CyberSecurity Awareness Training and Phishing Simulations
55
entries
18
Designer
Need a set of overlays for Streaming use on Facebook, YouTube, Twitch, to be used in OBS Studio
$299
Podcasts focused on computer consultants, IT people, and service providers. The particular podcast we are building for
11
entries
4
デザイナー数
Realtor Closing Cost Flier
$299
This will be an informational flier
17
entries
5
diseñadores
Corporate Office shop front design for large decals for our boutique recruitment firm in Melbourne
AUD 399
We are a boutique recruitment agency that specialises in sourcing outstanding people in the areas of Construction, Engin
54
entries
12
diseñadores
Cover page for proposal
CA$ 399
We are a contractor that provides roofing, siding, masonry and window and door services. Our model is Supply and Install
51
entries
9
designers