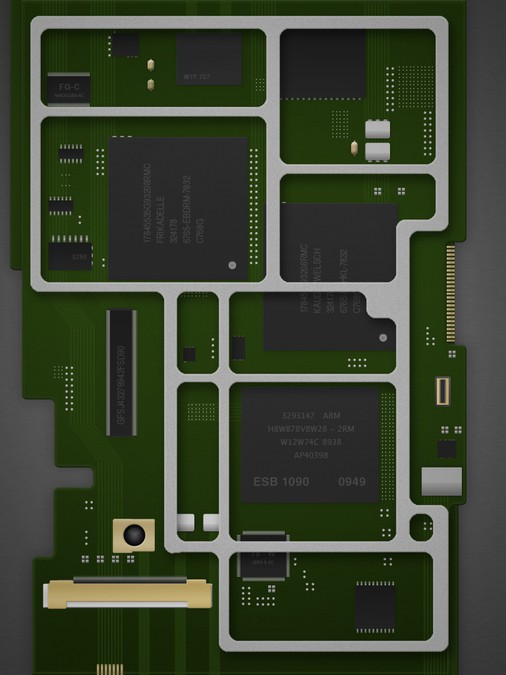 For a non-disclosed game I would like a background designed. The game will be made for the iPad (1 and 2) and I would like it to resemble the iPad's motherboard.

The idea behind the background is that it will be covered, by a black screen for example, and holes will appear in it from time to time. At that point, the background that I want designed will be visible (partially, through the hole).

I want the iPad 1 and 2 motherboards as a background, to be specific. I was thinking about the following style of design;

Of course, it should more closely resemble the iPad 1 and 2 motherboards (so I basically want two backgrounds designed, one for every iPad). A little added imagination to the motherboard design is welcome, since the actual motherboard of an iPad is mostly batteries (which is a bit boring to look at ;-)). I'd prefer it if the chip of the iPad (A4, A5) is large and clearly visible.

I've created a mockup of what my idea is for the background, in-game;

Both the backgrounds should fit the whole screen of the iPad 1 and 2 (1024x768). The game will be Landscape-mode only.

The game itself will be retro style, since it is based on a very old game. The game will be mixed up with new elements. The design I want is related to those newer elements.