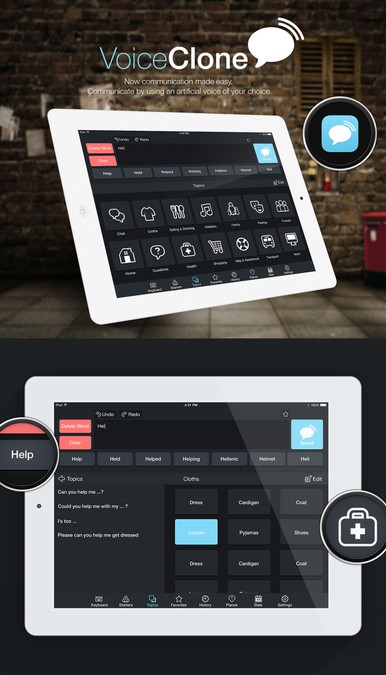 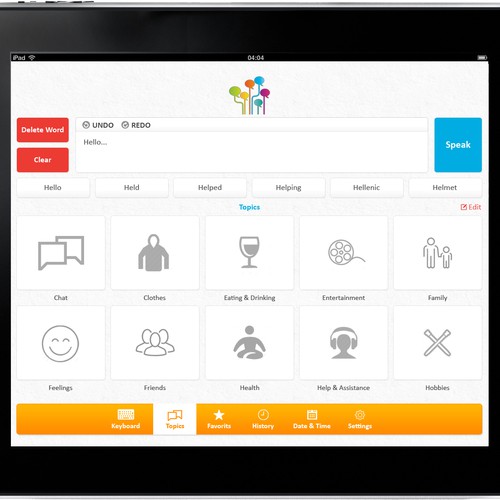 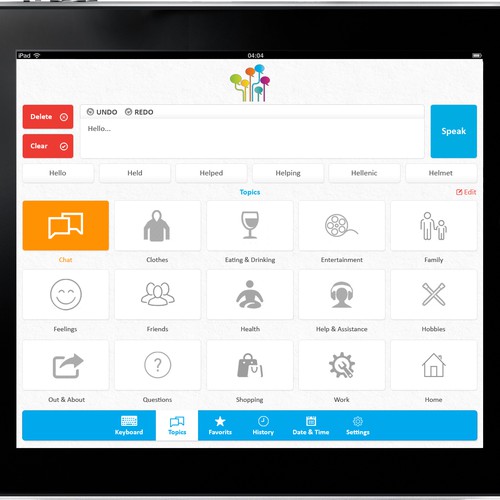 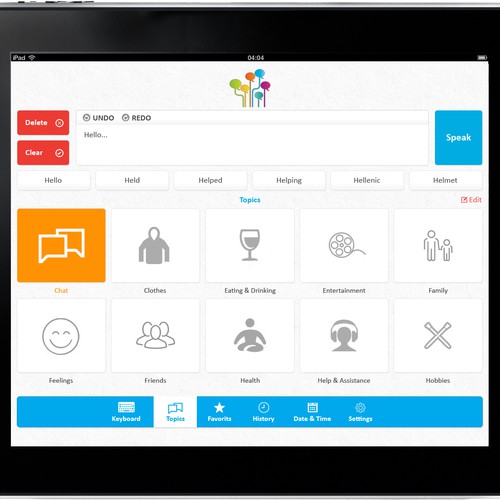 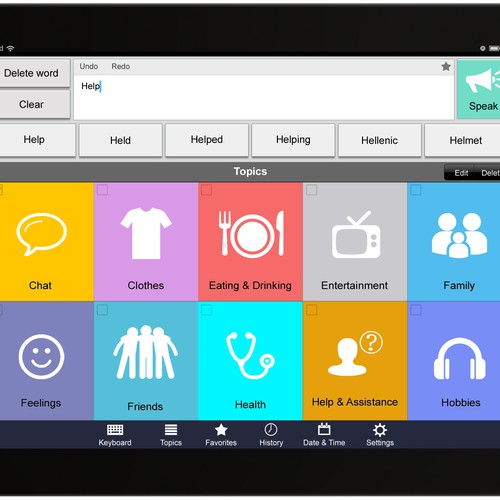 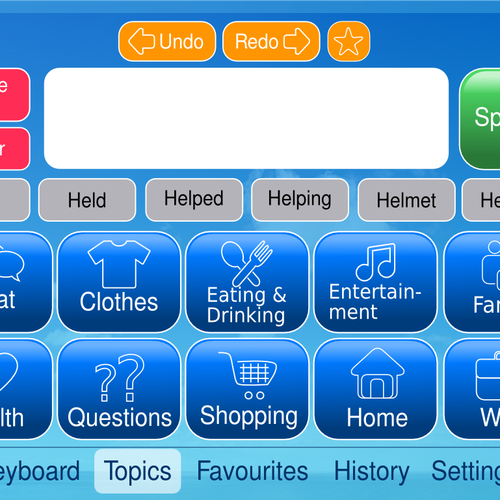 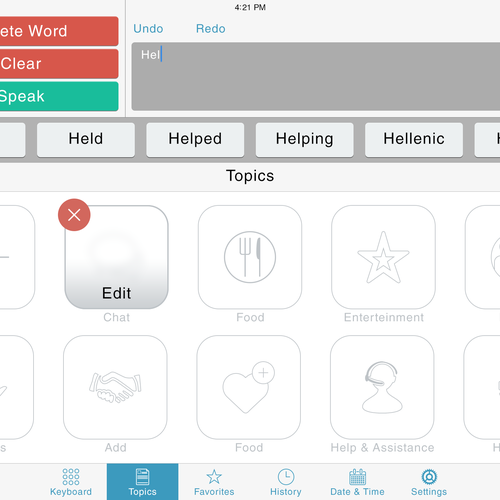 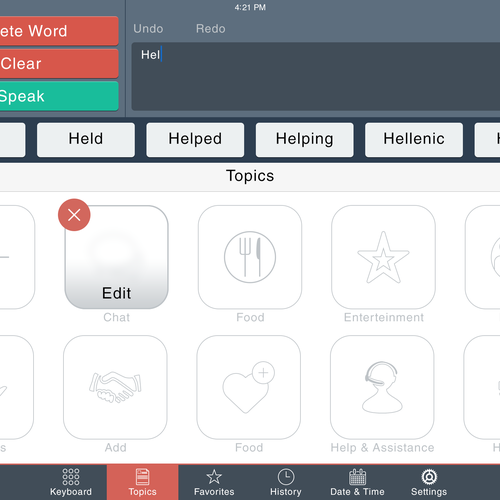 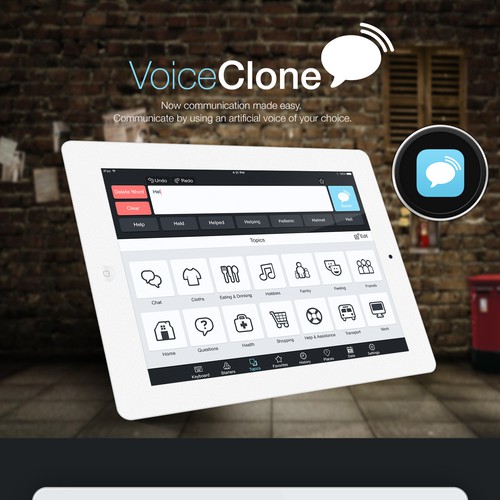 We have developed a text-to-speech app that allows individuals with vocal disabilities to communicate by using an artificial voice of their choice. The app interface provide several ways to enter a text, from a simple keyboard with predictive text to categorised sentences related to pre-defined topics. It also allows a large degree of customisation: the user can store favourite sentences and browse an history of already used sentences. He can also add new topics and the set of sentences / words associated with this topic.
Once the user has entered a sentence in the text input interface, he can press a "Say it" button and the speech is automatically generated.

The app has also a "user settings" page where the user can customise the voice.

Sleek, clear and modern design with a set of colours that match the latest iOS version. The image below (logobulles-hd) could give an idea of the sort of colours we would like to have: bright and modern (but of course this is just an example, don't feel limited by it).

The typography should be also clear and easy to read for the patients (who are generally in theirs 60s). Also any buttons should be large enough in order to be used by patient with declining hand functions.

We don't have a final name yet, it is called VoiceClone for now

Actually we just need 2 screens plus a proposal for the app icon.

The images attached below show some examples of what we have developed so far for the app screens as well as the app logo (this one is just a first proposal and could be completely redesigned).

The general layout of the screens should stay the same but the choice of colours can be changed of course, as well as the look and feel of the buttons. Most of the screens share the same layout, so we want to focus on the redesign of two screens specifically: the "topics" main and secondary screens.

The topics screens allows the patient to compose his message in a faster way than using the simple keyboard (keep in mind that most of the patients have some degree of motor disabilities). Instead of using the keyboard, the patient can select a topic, such as "Clothes" and then a "secondary" screen showing a list of sentences and words associated with the selected topic is displayed.

The "topics" main screen is illustrated by images IMG_016 and IMG_021. Your first task is to design the pictures for the topics buttons. We want a picture for each of these topics:

The "topics" secondary screen is illustrated by image IMG_024. This screen displays the sentences and words pre-stored by default for a given topic (selected from the main "topics" screen). The patient can edit these sentences / words and add some new ones. We initially thought that the user could personalise the white boxes with some pictures of his choice, but this turns up to be too much complicated when the number of words is large. Therefore, your second task is to redesign this secondary screen (IMG_024). We want to have a better arrangement of the proposed words, something like an array of words, or a cloud of words, instead of the white boxes. It should be easy to read and to type. The number of words for each topic is around 15 but some are more likely than the others.

3. Proposal for the app icon

Clean and modern business app design
US$ 1.999
We are a software company, providing web and mobile solutions to small to medium sized companies. We are looking for a u
130
entries
27
diseñadores
Luxury Hotel Concierge Tablet App Design
$1,200
Provides in room tablet for all concierge and hotel related items and info
37
entries
16
デザイナー数
CyberShell a cyber defense company
$499
CyberShell is a cyber defense product.
77
entries
27
デザイナー数
A beautiful and professional UI for a fax-sending app
$799
Inspiration: https://99designs.com/mobile-app-design/contests/design-beautiful-professional-ui-fax-sending-app-813448/e
18
entries
15
diseñadores
c2c e-commerce in Mongolia
999 USD
An e-commerce app with c2c business model, connecting seller and purchasers along with b2c features. It has various feat
43
entries
18
designer
I want an APP designed call WHEN I DIE. A vault with all your personal info for your next of kin
EUR 929
The APP I need built is like a vault where people can store all their personal information. After the death of the perso
53
entries
21
diseñadores