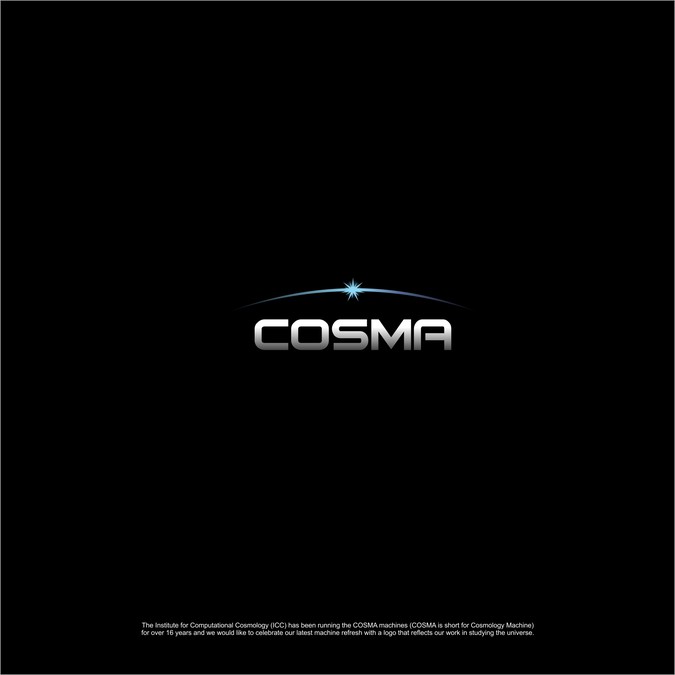 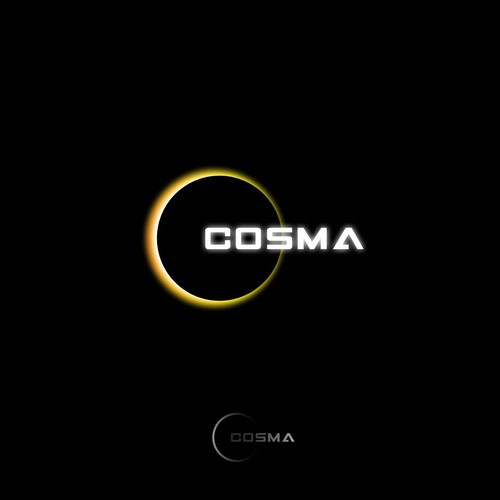 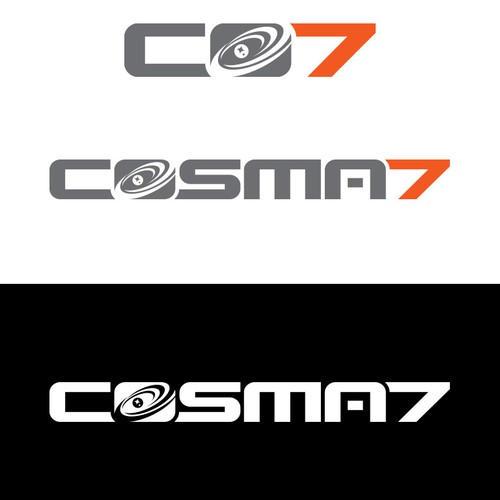 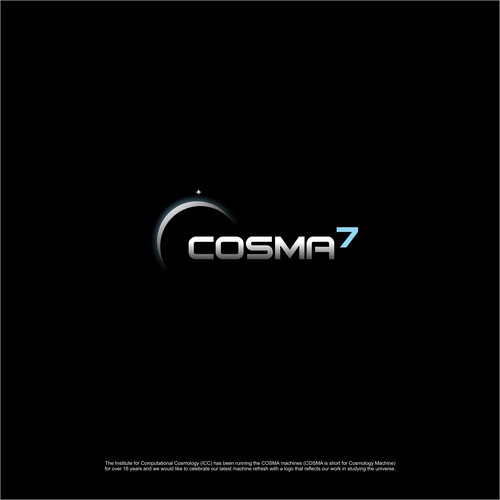 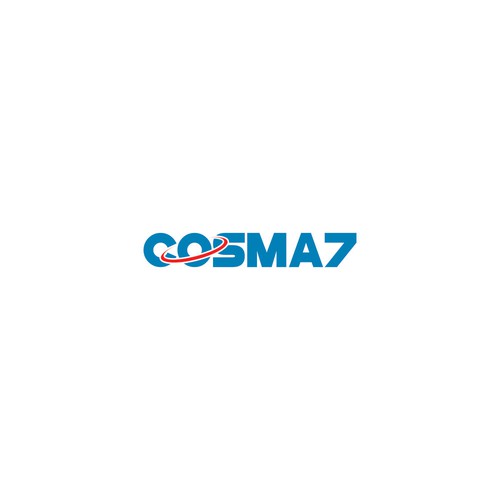 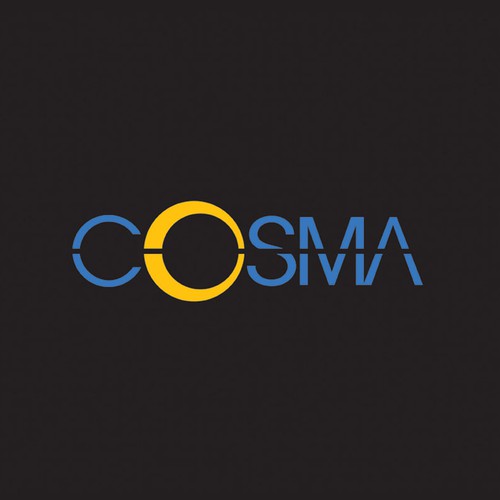 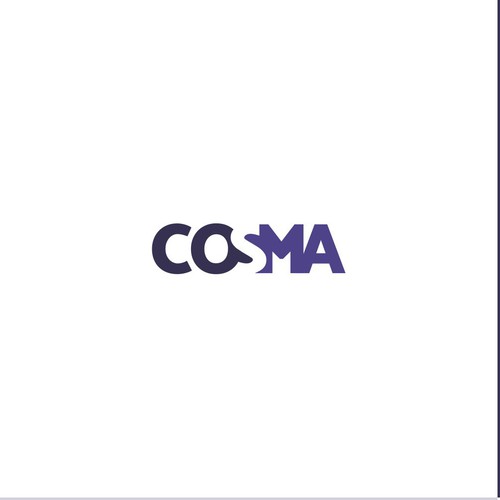 We need a logo designed for our latest high performance computer, named COSMA (version 7), at Durham University. COSMA is the Memory Intensive system (MI@DiRAC) of the DiRAC National facility (http://www.dirac.ac.uk) and funded by STFC. The system is designed to run the memory hungry simulations of Cosmology and Astrophysics.

The Institute for Computational Cosmology (ICC) has been running the COSMA machines (COSMA is short for Cosmology Machine) for over 16 years and we would like to celebrate our latest machine refresh with a logo that reflects our work in studying the universe. Elements we would like to see in the logo could include galaxies, black holes, stars, supernovae and solar systems, for example the logo could be a model universe with a detailed model of the sun included.
The logos of Durham University, DiRAC, STFC and the ICC will sit alongside in web pages and presentations. Please also note that the logo will be printed on the sides of the computer racks so you can think long and rectangular in shape, should that inspire you (see the attached photo of COSMA, 5th version, to get an understanding of a computer rack). This further means you are likely to need to put forward a logo that can be printed on black as well as white backgrounds. The final design should reflect the cosmos and exploration.

What does COSMA do?

The COSMA@DiRAC supercomputer has been designed and built to make virtual universes. The goal is to use what we know about how the Universe started (the `initial conditions'), apply the known laws of physics and calculate what emerges. We start the simulation of a virtual universe in the computer shortly after the Big Bang. The visible universe started with the Big Bang, a rapidly expanding `ball' of matter and energy. At this early time the Universe was much smaller and denser than today and almost completely smooth. Fortunately observations of radiation from the earliest observable times, the Cosmic Microwave Background, tell us a lot about the properties of the early universe, including what the main ingredients were, how they were distributed and how fast the Universe was expanding. We also know a great deal about the laws of physics. For creating a virtual universe, the most important one is Einstein's law of General Relativity. This governs how the Universe as a whole expands with time and how gravity, acting on dark matter and gas, causes the cosmic web of structures to condense out of the almost uniform soup left-over after the Big Bang. To create the visible Universe, however, we also need to include the laws that determine how normal matter interacts with light, which makes it possible for gas to cool down and condense, and to teach the computer the physics involved in the formation of stars and black holes. COSMA@DiRAC is also used to model colliding black holes, solar physics, planetary physics, such as Jupiter, and particle beams.

If you would like to get an idea of the output of our computer, here are two projects worth having a look at:

The EAGLE project (http://icc.dur.ac.uk/Eagle/):
The EAGLE project has been a turning point in COSMA'@DiRAC's history. Using new ways to represent the laws of Physics inside the computer, we were able to follow the formation of our Universe. Indeed, the picture that emerged after months of computing has proven to be almost indistinguishable from the one seen through the world's largest telescope. The simulated galaxies reproduce the masses, sizes and colours of real galaxies with impressive fidelity. As a result, EAGLE has been a powerful tool for understanding the formation of galaxies: for example, it is possible to look into the past, understanding how a special type of galaxy has formed. It has even been possible to explore how the Universe would have looked if the fundamental constants of physics had been different.

Gravitational waves: (https://www.youtube.com/watch?v=zFTvzvJrRgs):
COSMA@DiRAC played a key role in the first direct detection of gravitational waves, which made headlines around the world when it was announced in February 2016, and earned the 2017 Nobel prize in Physics. COSMA@DiRAC has been used to perform computer simulations of colliding black holes, which are used to produce theoretical signal models that aid the gravitational-wave detections and, more crucially, make possible measurements of the physical properties of black holes and neutron stars. Immediately after the first detection, one of the COSMA@DiRAC machines was dedicated for one month to producing simulations that helped to verify the measurements of two massive black holes colliding and merging into one.

Bi Power Solutions
299 USD
We are consulting firm providing business intelligence software reporting services to clients in a variety of industries
89
entries
20
designer
Clean and powerful logo for construction software company.
US$299
We sell cost estimating software and services to construction companies in the United States.
871
entries
125
diseñadores
Strong clean logo for software engineering consultancy
239 £GB
DeveXe is an IT consultancy with specialisms in Scala and Java programming and data processing with XML and Linked Data
111
entries
31
designer graphistes
Software development company in need for branding and long term designer
$1,149
Hi, my company is oxygen-tech.com and for the last month we were working on our new brand identity. The last piece of pu
528
entries
116
デザイナー数
Dynamic and smart mascot for a sharing platform
449 €
Our platform allows community manager or marketeurs to create easily a blog. In one click the post can be shared to othe
136
entries
40
designers
We need a logo for our new online shop "campus hero" - sustainable hardware for students
1.309 €
The non-profit IT company AfB gGmbH specializes in taking over decommissioned IT and mobile devices from large corporati
248
entries
48
designer

Comienza ahora
Outstanding Design-Relaunch www.quality-circle.com for mobile and desktop (NO CODING)
1.499 €
The QualityCircle is a complete solution for creating, managing and developing develop-ment plans for a person's skills
59
entries
17
Designer
Design a fun and quirky logo for a SaaS startup
269 €
We are a software-as-a-service company with a product that helps developers keep their code in good order. We don't want
81
entries
44
designers
Amazing logo, Youtube, and Twitter background needed for tech channel
699 USD
We produce tutorial, educational, and new technology coverage video tutorials for Youtube. These videos specifically cov
117
entries
20
designer
Design hacker themed logo for web based training environment
299 $US
HackITPro is an online platform that gives IT professionals the ability to test their network penetration skills in a si
88
entries
32
designer graphistes
Above and Beyond IT Solutions Logo
299 $US
IT services Computer Repair Network Administration Technology Consulting Data Cabling Target Audience are small bus
86
entries
18
designer graphistes
App Icon for "TatePad" - Text Editor for Japanese Novel Writing
JPY 25,000
[English] In this contest, I would like to make an app icon for our "TatePad" app - A "Vertical writing" Text Editor for
97
entries
26
diseñadores