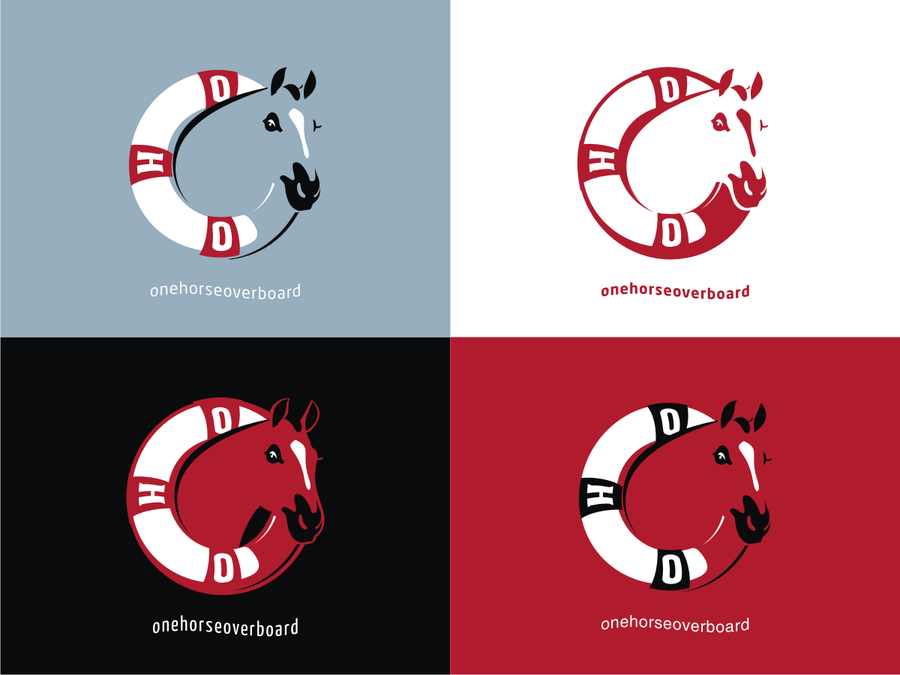 Create the logo for 1horseoverboard. NOTE: I just want a pictorial or abstract mark. 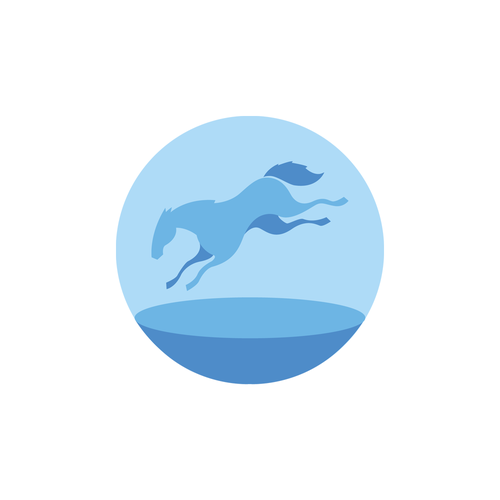 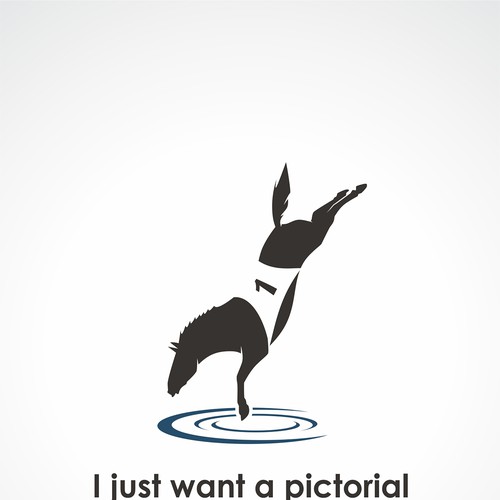 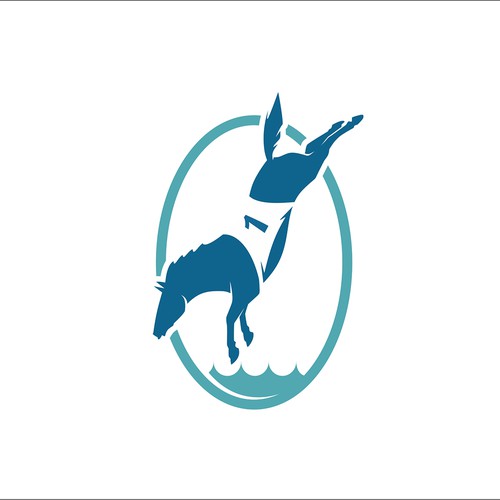 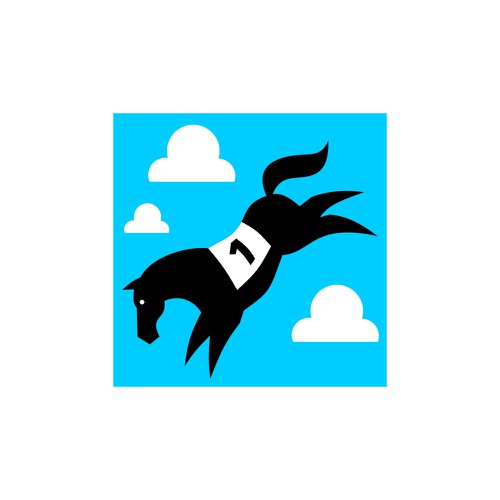 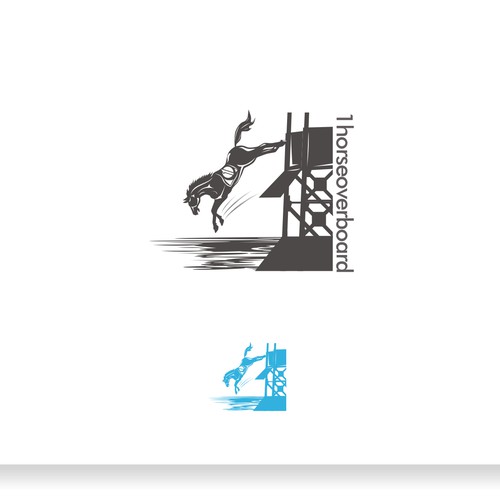 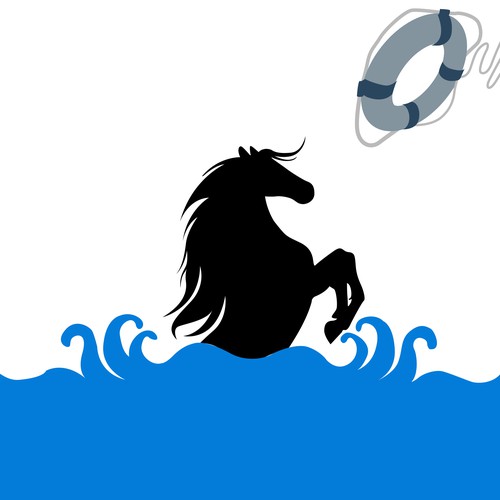 I am a photographer, writer, videographer and editor and need a logo for the blog I am about to launch. The blog's name is 1horseoverboard, which is a reference to the lyrics of a song I like + the diving horses that used to be popular attractions in certain seaside resorts + the so-called "horse latitudes" and the origins of that term. The blog is meant as a way to update clients and friends about my activities and also show examples of my work, which ranges from portraiture to fashion to street and travel photography.

The concept of "horse" and "overboard" must be clearly conveyed. ("Overboard" means "having jumped or fallen off of a ship or boat"). Maybe the horse is suspended above the water, mid-leap, or maybe it has broken the surface of the water. I like the forms of the horses depicted in the sample images of "diving horses" which I have uploaded. (I do NOT want a rider on my horse, however!). Perhaps the horse is shown in silhouette. Also, I like the idea of the horse wearing a racing "silk" with the number "1" on it. This is not mandatory - just an idea, and it may not work visually. The "water" I have in mind is the ocean or at least a large body or water.

The logo should be clean and elegant. It should be workable as an avatar as well as a general logo for the blog. I like "flat" designs, but I am open to a design with some depth/texture. Overall, I think I prefer designs with more of a "retro" or classic feel to designs that are too "contemporary" or trendy

Some designers have expressed some difficulty with the concept above, so in addition to the "jumping/leaping horse" idea, I will be open to other concepts - but whatever your concept, again, your design must clearly convey "horse" + "overboard" For example, an alternate solution could show a partial horse IN the water. An element such as a life preserver could be used to suggest "overboard". I'm sure there are other possibilities that I have not considered.

Restoring a vintage 1960s camper to make into a photo booth
$299
It is a photo booth set up in a old Shasta 1967 camper trailer for weddings and parties
38
entries
8
designers
Design a logo for a Video Director & Photographer
US$299
I am a video director and photographer. www.westonheflin.com
61
entries
24
designers
"Flash Advantage" real estate photography needs a great logo that will encapsulate what we do!
US$ 299
We are a real estate photography company in the NY Tristate area. We shoot houses, apartments, buildings etc. and provid
390
entries
107
designers
New Drone company needing a lit logo with a bee
$299
Drone aerial photography
90
entries
19
designers
A photography logo focused on great typography instead of graphics
$399
I'm a wedding photographer. My target bride is someone who's into warmth and feeling, rather than brides who are into b
337
entries
71
designers
DRONE SERVICES DESIGN/logo.
299 $US
AERIAL VIDEO/PHOTO
84
entries
10
designer graphistes

Comienza ahora
Design a cross-culture wedding & commercial videographer logo
CA$ 399
I create impactful, personalized (wedding & commercial) videos for couples and business owners.
77
entries
14
designers
Need a dope, youthful and fun, but sophisticated logo for photographer "Daniel Motta"
499 US$
I'm a Dallas based photographer that photographs more corporate than anything. I do shoot weddings but the majority of m
111
entries
34
designers
Design a Modern, Sophisticated, Animatable Logo for Finial Productions
$299
We produce videos that showcase events, promote businesses, feature individuals, and explain products, services, or conc
297
entries
64
designers
Logo For Animode, Nature Photography
USD 499
We are wildlife photographers. We are based in Costa Rica. Our web page is: www.animode.net We want to have a logo fo
90
entries
41
designer
Your Natural State
$299
Boudoir photography in Arkansas, the Natural State. Targeting classy, sexy women who want a confidence boost.
338
entries
30
designers
Photography and Video company Logo
US$299
I am looking for a logo that uses my company name in a creative way. My company name is: Moretti LLC. On instagram it
86
entries
18
designers