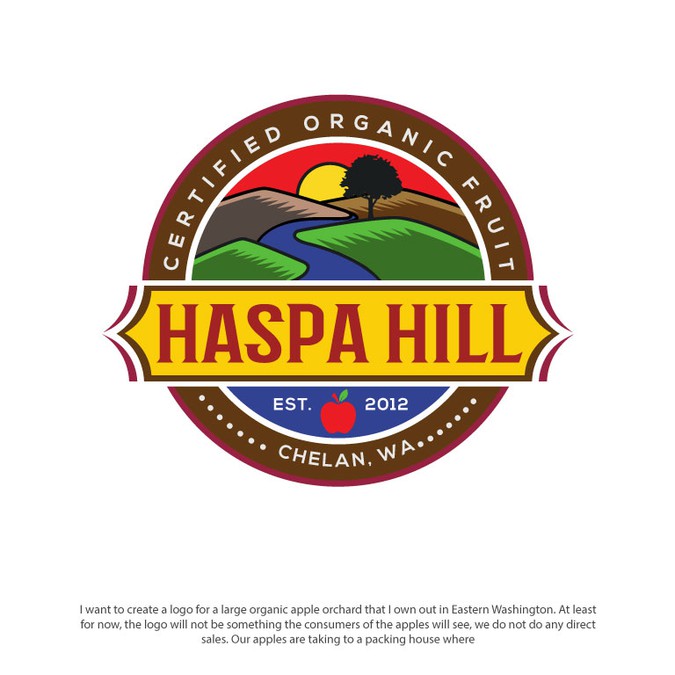 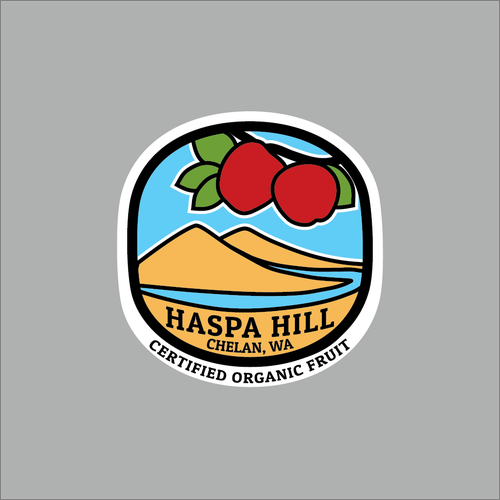 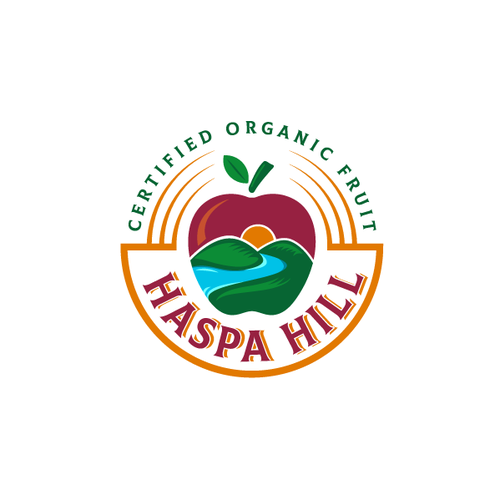 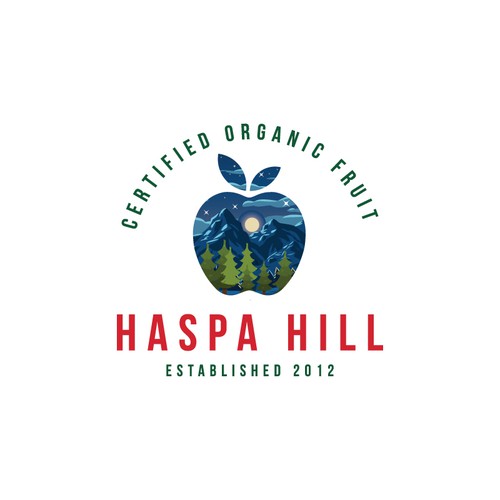 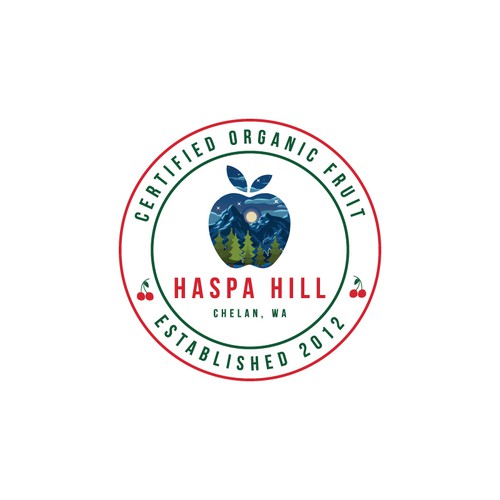 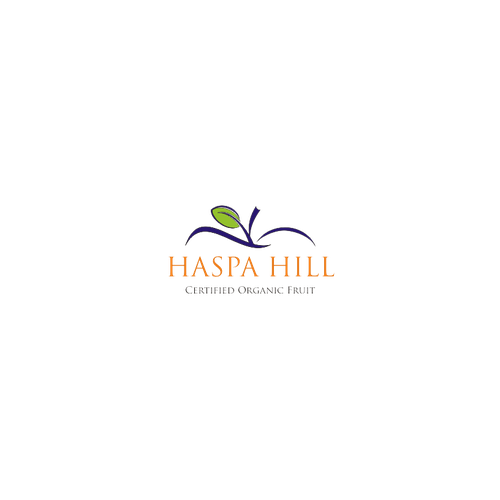 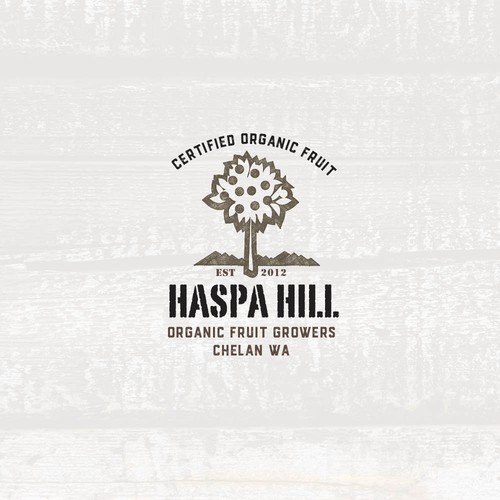 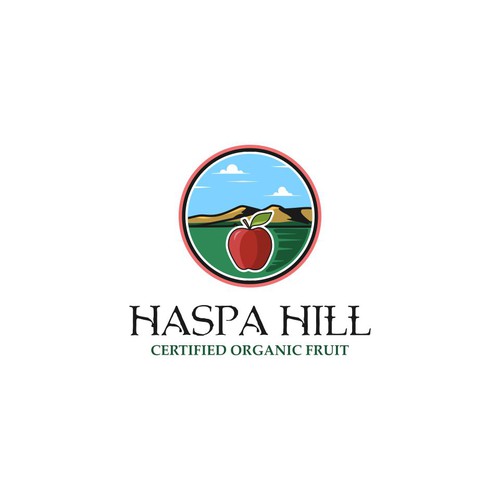 growing Organic apples and cherries (cherries are minor part of biz, so not essential to refer to

ROUGH NOTES:
I want to create a logo for a large organic apple orchard that I own out in Eastern Washington. At least for now, the logo will not be something the consumers of the apples will see, we do not do any direct sales. Our apples are taking to a packing house where they are sorted and graded and then sold under a distributor name and it is their sticker on the apples that you actually see in the store. The logo will be put prominently on all of our trucks (and other equipment), the sign at the entrance, 100s of tshirts and jackets and hats, etc. also letterhead and business cards. Possibly our main website that is the mother company. possibly some minor local sales that farmers markets are interested in doing (but that is very much a side business, if it even happens)

Haspa Hill is a special place. It is gorgeous and grounding.
It feels soulful and earthy but still clean and not busy. Possibly some tones of that – but I am open
We appreciate nature and try not to be invasive to the natural setting
A sanctuary
Rugged individuals
Counter to the plastic and wasteful modern world
It’s a tough business, but we treat everyone well and care about them

Haspa is a Native American (Lakota Sioux tribes). Haspa is the word for “apple”. I like the way/ethos of native Americans. I am open to some native American influence but not at all essential, I am not sure, I would have to see it to make that decision. Probably not.
Add pics of the orchard that you sent to tad

I think I want to incorporate a hill(s) in some way
Probably would be good to incorporate an actual apple, but again, this is not requisite
The orchard is a lush place in the middle of a very arid region
Below it flows the columbia river (where we pipe in the irrigation water)
(we also do some cherries, but that doesn’t need to be incorporated – they are about 10% of the orchard, probably brings too much complexity to include reference to that.

I attached many images. Most of them are just things that struck me as relevant or inspired I liked the coloring. I also included pics of the actual orchard. For some reason, I really like the style theme of the “Kimo’s” logo, not all of it but the upper ¾ mostly. I could see doing something similar. I actually uploaded something similar. But I am ambivalent in terms of right direction, I am totally open minded – this is why I am turning over the project to you guys ;) but I do make quick decisions.

There are also a couple logos that a friend did that I don’t think are right, but I included anyway

I think it makes sense to include an apple somewhere in the logo. But not some bright plastic red type of apple, but a richer, deeper red. I can find some examples of the color I have in mind.

I don’t think we want to use a lot of true primary colors. Most orchard logos out there are just basic primary colors with a picture of an apple and a pear and cherries. We want to show that we are different from them.

Don’t want it so complex that it would be very difficult to embroider on hats and jackets (but maybe in your experience it is actually not a big deal – this is just speculation, so take for what it is worth)

Words that must be included:
Haspa Hill
Certified Organic Fruit

Optional:
Chelan, WA (fairly strong preference to include this, but would be the smallest font. It is the location of the orchard)
Organic Fruit Growers
Orchard(s)

I am open to anything. But do not want a “slogan”

Create a logo for genuine grain to glass distillery!
899 US$
We produce superior craft distilled spirits from truly from grain to glass. We raise our own grains and using state o...
64
entries
15
diseñadores
Design a creative logo for an AG company that visually says it all!
1.599 $
We farm avocados, citrus and wine grapes for clients. We are a well-established company looking to update our look. W...
141
entries
50
Designer
Logo for a $ Billion product
1.599 USD
Signifiacntly improves the yield and taste of fruits and vegetables. Also works on flowers and grasses...
202
entries
65
designer
Jersey Shore MMJ logo contest
US$ 599
Medical Marijuana targeted to patients on or near the Jersey Shore
201
entries
55
designers
Thrive Enterprises is looking for an upscale logo for a cannabis cultivation and processing startup
2.559 $
We own a medical cannabis cultivation and processing facility as well as a dispensary. We are based out of Detroit Michi
391
entries
56
Designer
Agricultural Leadership Foundation of Hawai‘i needs an awesome new logo!
$ 599
The Agricultural Leadership Foundation of Hawai'i provides leadership development opportunities for people committed to
74
entries
10
Designer